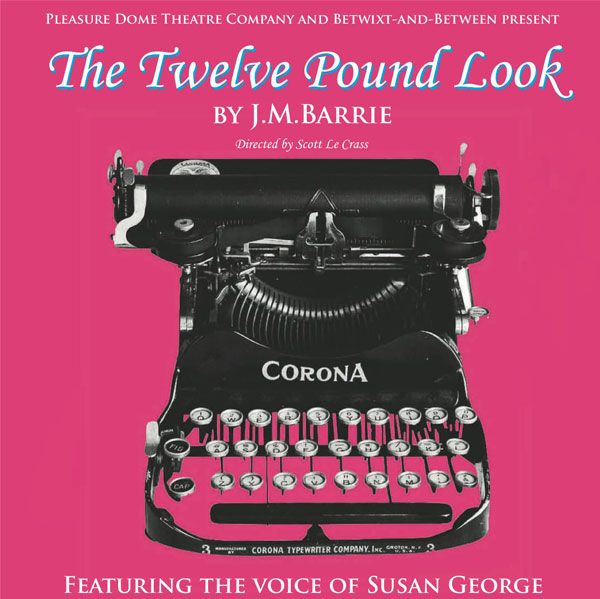 About the show and the companies.

Pleasure Dome Theatre (uniquely provocative and hugely enjoyable-LEAR ***** Britishtheatre.com) is overjoyed to be returning to the stage and delighted to be collaborating with emerging company Betwixt-and-Between.
WHAT THE CRITICS SAID
"Pleasure Dome and Betwixt-and-Between have rescued one of Barrie’s neglected short plays, The Twelve-Pound Look, and adapted it into an amusing social comedy that still sparkles after 111 years.
"Daniel Arbon remains perfectly pitched as Harry, amusingly pompous without becoming a caricature, while Charlotte Ellen is excellent as Kate, calmly deconstructing her ex-husband. Helena Payne plays Emmy as a kind and dutiful wife who has hidden depths that Harry – once again – has failed to spot. While Barrie playfully positions The Twelve-Pound Look as a warning to husbands to watch their wives, it continues to be a delightful social comedy that questions where we find value in our lives and each other."
✭✭✭✭ SHOWCALL.ONLINE
Together they are bringing J.M.Barrie’s little-known comedy, The Twelve Pound Look; “one of the most nearly perfect one-act plays of contemporary drama,” to the newly appointed Exmoor Studio Theatre in Dulverton.
This four-hander with direction by the award-winning Scott Le Crass promises to enchant and enthrall audiences with its wholesome, funny and surprisingly modern twist on domestic bliss, brought to life with Pleasure Dome’s personal brand of theatrical magic, just the tonic whilst we wait for theatres to fully open.
The cast will be joined on stage with the recorded voice of national treasure Susan George.
THE TWELVE POUND LOOK
Streaming 19 June - 11 July 2021
Running Time: 42minutes and 42 seconds
24 Hour Streaming Passes cost £12.50 + £2.50 per household. (Read details about our system here)
BOOK STREAMING PASSES NOW